Are you ready to take up the mantle and be king?

Enter the magical world of Avalon, where wonders are a daily sight and miracles happen. The land of Avalon shows up in its full glory in the Avalon II slots game.

The Land of Magic 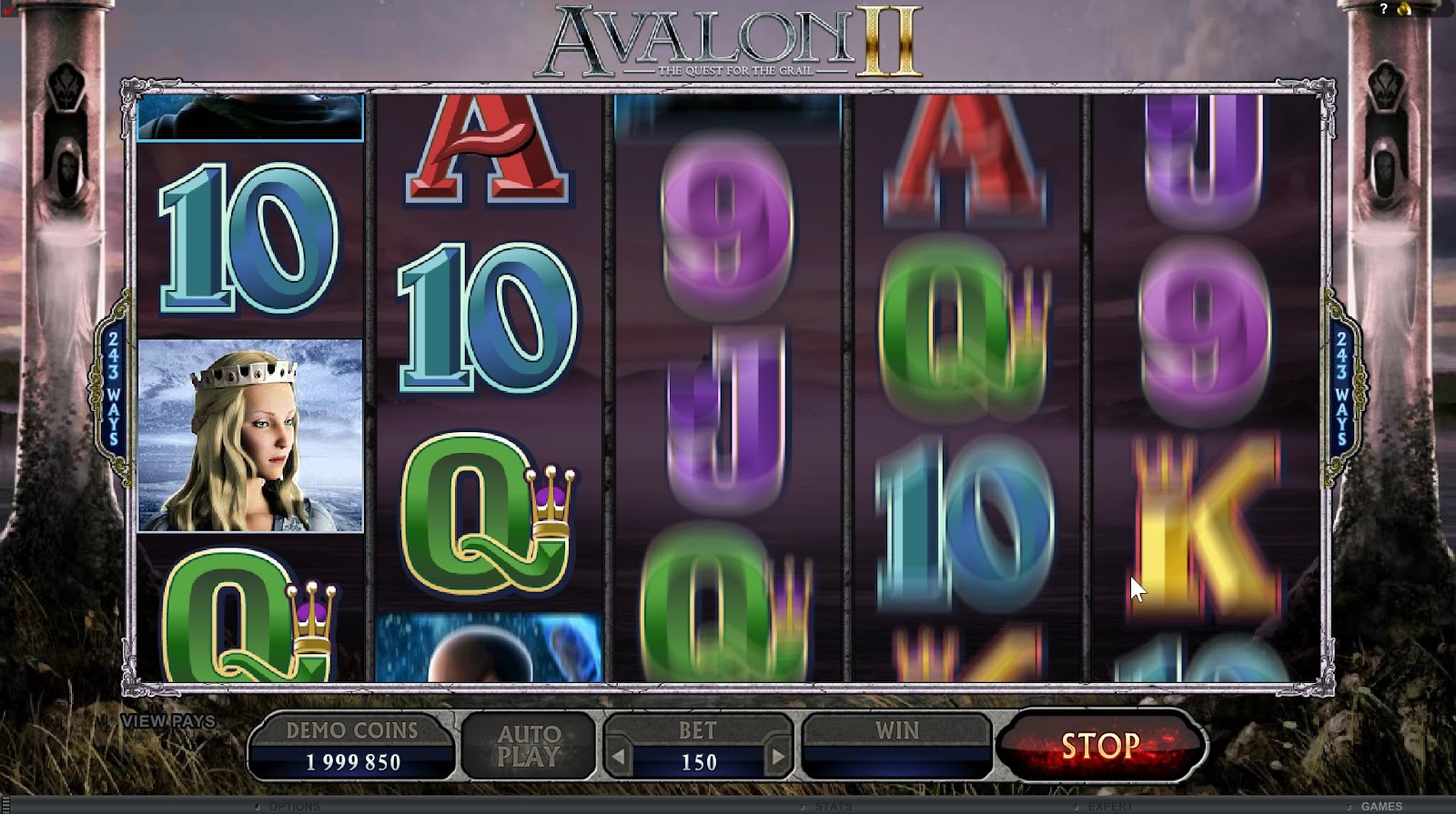 Behold the vast and majestic land of Avalon. All out there is for you to conquer, if you have the guts to step forth and take what is yours. The land of Avalon takes on a fantasy theme, with modest and blocky graphics to capture the mood of the setting. The borders of the reels take on a castle-like construction, immersing you into the setting. The music takes on a calming yet uplifting flute melody – enticing you into this lush land of opportunity and magic. The slots reels take on the symbols that are important to the land of Avalon – King Arthur, the wizard Merlin, the beautiful princess Guinevere, the seductive Morgan, the horrific Black Knight, the lady of the lake, and the Holy Grail. 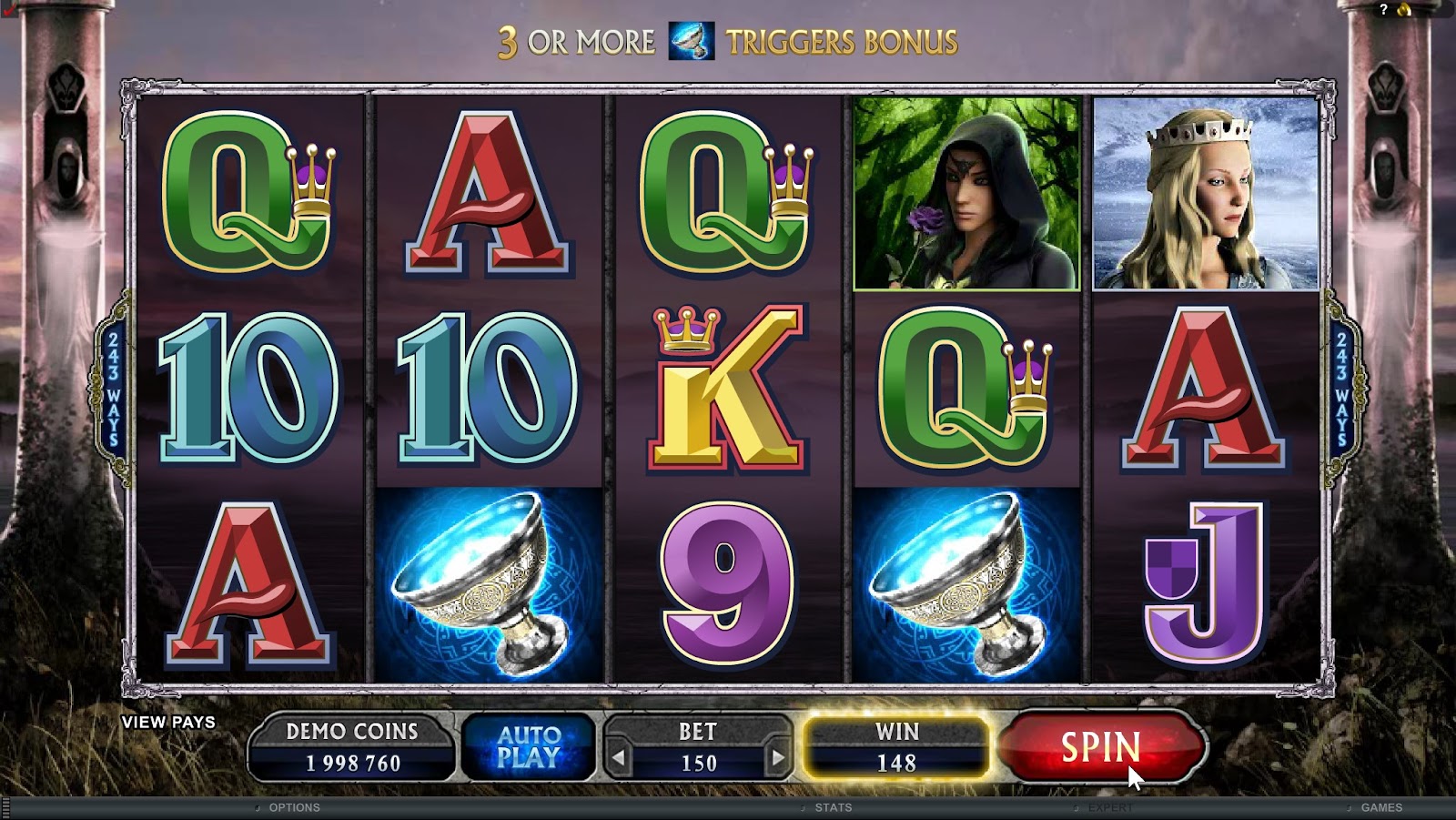 The mysterious Lady of the Lake is the “Wild” symbol in the Avalon II online digital slots machine. The Lady of the Lake Wild symbol will help you make more matches by substituting for any of the other symbols in the game whenever she appears. What’s more, she is also an Expanding Wild. That means she will expand to fill up the whole reel whenever she appears, enabling you to make matches from any line in that column! More chances to win big!

During your spins, Merlin can sometimes appear to grant wishes! Whenever Merlin appears, you spin the wheels of fate, and are awarded either by an instant cash prize, or a random multiplier.

The Holy Grail is the very special Scatter symbol in this slots game. When three, four or five of the Holy Grail Scatter symbols appear, the special feature of the Avalon slots game is revealed to you. When you trigger this bonus feature game, you start on a journey for conquest and great wealth.

First you have to reforge the sword Excalibur by rolling the dice to assemble the fragments. Reforging Excalibur in ten dice rolls awards an additional fifteen times (15x) total bet. When Excalibur has been fully restored, a reward of six times (6x) total bet will be granted for each remaining dice roll.

Next, you move on to the Misty Vale. Here, you get fifteen free spins. You get to choose an extra character as an extra Wild symbol to further increase your chances of winning. The chosen symbol will also give a two times (2x) Wild Multiplier!

After the Misty Vale, you get a chance to choose your path in this adventure.

If you move to the Whispering Woods, the mystical white knight will appear and present you with five shields to choose from. You may keep the presented shield or choose another. You have two chances to change your mind.

If you instead decide to move to the Forest Falls, you are awarded with twenty free spins with the possibility of Trailing Wilds awarded. Trailing Wilds will create a trail of wilds as they slide down the reels.

If you dare to brave the Dusky Moors, you are given the chance to match helms. If you manage to match two of the same helms, you will win a prize! Increase your multiplier value by revealing individual helms before matching a pair.

After the fork in the road, you end up in Morgan’s Keep. Here you get twenty free spins with Rolling Reels. Rolling Reels can award multiple consecutive wins, and also increase the multiplier value to up to six times.

The next part of your journey is the Hall of Shadows. Defeat the Black Knight to recover the Grail! Each strike will award a prize. The success of each block or attack will determine the size of the prizes awarded.

After an arduous journey, we finally arrive at the Isle of Avalon! Spin the Wheels of Avalon to reveal your win! Stopping with the Zero (0) wheel on the third wheel to unlock the bonus wheel for even greater rewards!

Join the great king and conquer the lands of Avalon, a place of great strife but also with great hidden treasures!