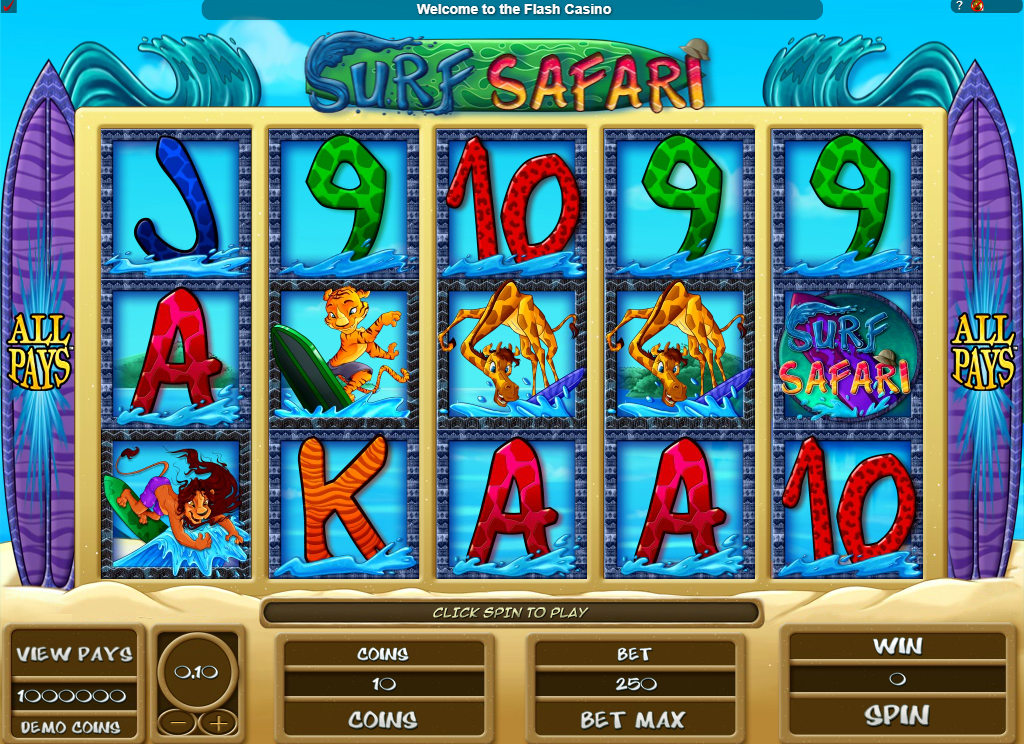 Surfs up, dude! Time to catch the big waves of Safari Bay!

Join the coolest animals of the Surf Safari and ride the turbulent waves on their fun and thrilling watersports!

Take in the salty sea air and the funky splashes of seawater while you slide in to catch the big one with the surfing safari dudes of the Safari Bay. 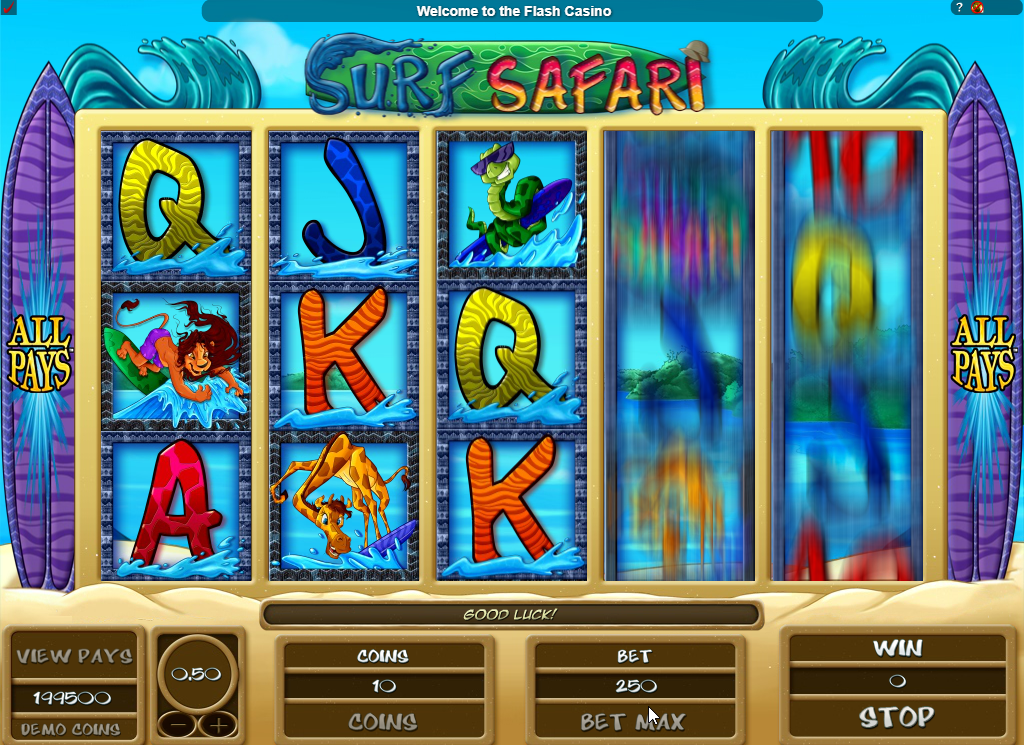 Kick up your surfboard and hop out into the sea! When you fire up the Surf Safari online slots game client, you are immediately given a few choices to make. Once you enter the game, you can decide on the coin value and the coins. The coin value is the amount in MYR which is represented by each coin you bet on the slots reels. The coins represent the amount of coins you wish to wager on each of your spins.  The more you decide to put into each of your spins, the greater the amount of Malaysian Ringgit you will win when you make matches on the slots reels! Surf Safari slots game also allows you to take the path of least resistance – to have the simplest and most streamlined way to play this slots machine, all you have to do is hit the Bet Max button next to the Spin button, and the game will immediately start spinning with the maximum bet allowed by your gaming site! Bet the maximum amount in order to get the best value out of each spin – maximise your winnings when you make matches! Do the right thing!

All wins pay in any position from left to right on adjacent reels, beginning with the leftmost reel. Highest win is paid for each symbol. The highest combination of wins is paid for each symbol on each reel. Total wager is the minimum bet multiplied by Coins. All wins are multiplied by Coins. In the Surf Safari slots game, there are two hundred and forty three different ways to win!

The Wild symbol in the Surf Safari online digital slots machine is represented by the Wild Splash logo! Better keep an eye out for the Wild symbol. The Wild symbol will help you maximise your chances of winning whenever it appears by substituting for all other symbols, except for the scatter symbols. When one or more Wild symbols appear and substitute in a win, the highest win is paid! 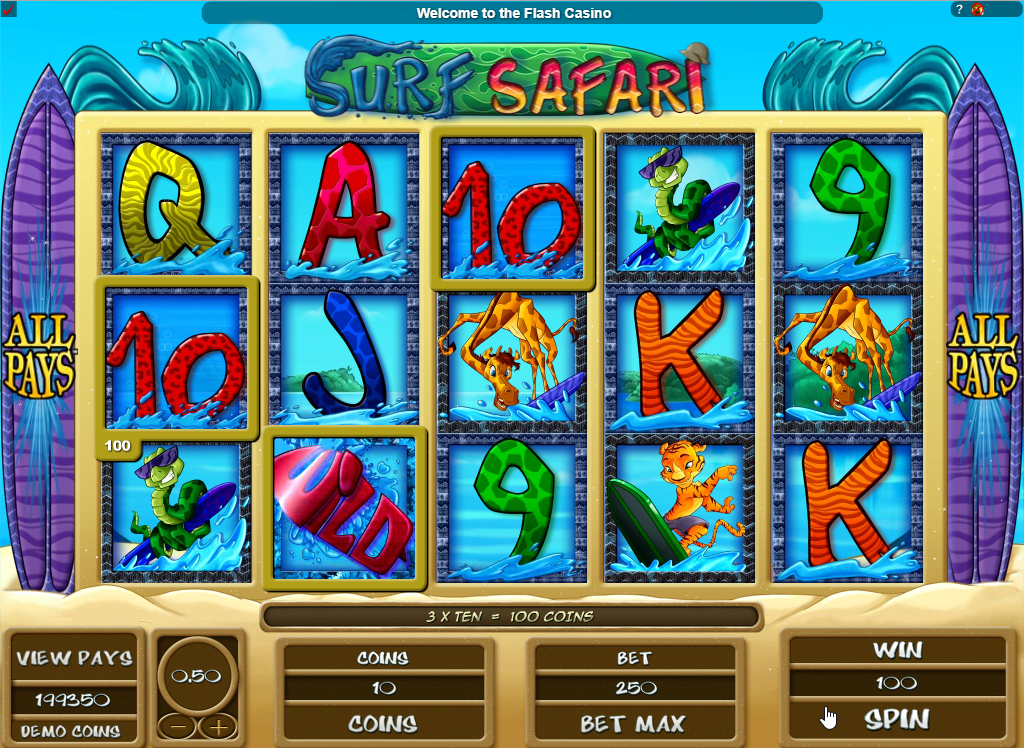 Cowabunga! The Surf Safari logo represents the Scatter symbol in this slots game. The Scatter symbol is a special symbol that will trigger the Safari Surf Wax Bonus when three or more of the Scatter symbols appear on the slots reels. When the Safari Surf Wax Bonus is triggered, a mini game is triggered and fifteen Surf Wax will appear. What you do in this mini game is click on the Surf Wax to collect prizes. If you choose a Surf Wax that reveals a prize, those prizes are added to the feature win. If you choose a Surf Wax that says “Collect” – the feature is over and you will be awarded with the accumulated prizes that you have picked. If you choose a Surf Wax that reveals a big win and “Continue”, you will be awarded a large prize and you will move on to the next round! Once you have advanced to the next round, you can continue picking from the Surf Wax and accumulate prizes until they choose the wax that reveals “Collect”! Aim for the big prizes, and combo up your winnings! 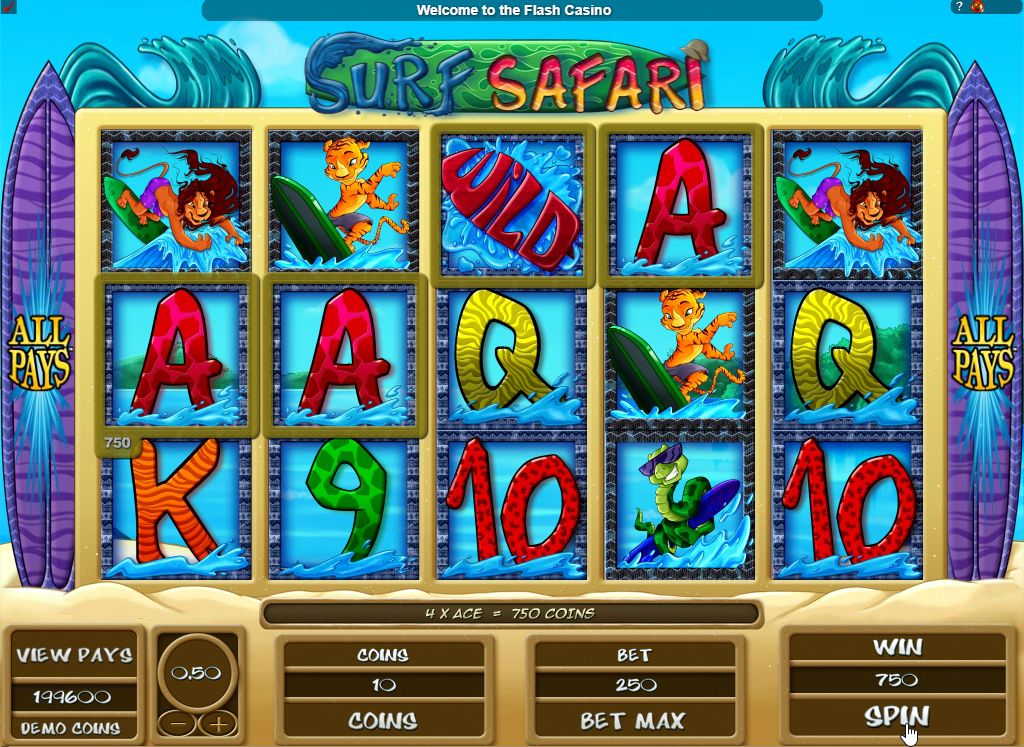 Taste the salty air as you conquer the waves!